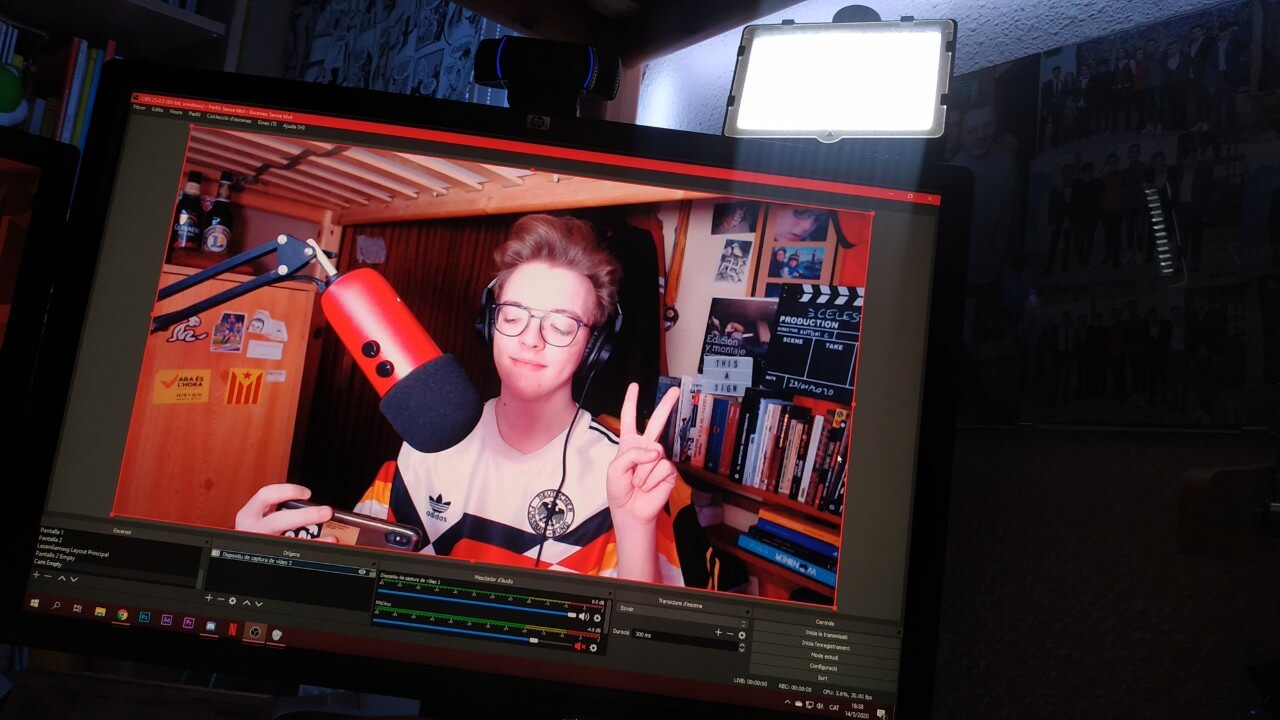 We speak to Marc Lesan, a young 19 year old from Barcelona who has become one of the up-and-coming voices for internet content creators in Catalan.

Tell us about yourself.

I’m 19 years old and I’ve lived almost all my life in Nou Barris, Barcelona. I was the typical prankster at school and I thought it’d be a good idea to export these pranks to the internet. I was raised in the internet culture. I’ve had a computer since I was three because my dad and my uncle are real geeks, and that’s why I took the leap to on-line contents, to Youtube. I started with a few sketches in Spanish until April 2020, right in the middle of lockdown, when I was on the sofa watching Zona Zapping and I said to myself: “How crap is this?”. It was then that I decided to make a video explaining that it was because of things like this that youngsters spoke less and less in Catalan, which is something that can be seen in today’s internet contents. From here I discovered the bubble of Catalan on the internet.

But you used to produce contents in Spanish, didn’t you?

While I was making that video, I thought that it might be hypocritical of me to complain of how few contents in Catalan there is on the internet when I wasn’t contributing almost anything on my networks because almost everything I uploaded was in Spanish. Between this and the fact that I was then contacted by Bru Esteve because they wanted to sign me up for Canal Malaia, I started to think about making a change. And now I produce audio-visual contents in Catalan.

What did you watch before you were an internet content creator?

I watched K3 at my grandma’s house, or 3XL, when my grandma let me, some videos on Youtube… Everything I watched on the telly was in Catalan, except for the odd series that I had to watch in Spanish because they didn’t do it in Catalan then, such as Shin Chan, but everything I viewed on the internet was in English or Spanish. I found it really hard to find things in Catalan, apart from JClic.

In general, who are your references?

When I was little I watched Wismichu, Auronplay… And who really had an impact on me, probably for life, were Vengamonjas, who I have had the pleasure of working with. I nearly freaked out when they offered it to me, because I’m a fanboy of theirs. They were my main Spanish-speaking reference. But it is true that most of the contents I view are in English. That just goes to show that having everything more interconnected is a disadvantage for the less common languages.

Who are these references in English?

A guy called Jay Foreman, who makes very funny educational videos. He’s who I most want to be like. And then a bloke called Pyrocinical, who I also think is quite funny.

And in the Catalan community?

Since I’ve been in this audiovisual bubble on Twitter, I now have a lot of references in Catalan. I think everyone from La Sotana is really funny. Joel Díaz. For practical work at university, I had to make a live video on the street and I wanted to imitate him and Els Vengamonjas in it. I wanted to create my own seedy version of the enfant terrible that they do really well, but I don’t. Everyone involved in Comedy Gold or El Soterrani, Charlie Pee, Modgi… In the audio-visual field I liked Bricoheroes, Godai Garcia…

And any references among up-and-coming creators?

There are very few young references in Catalan. There are not very many people, apart from those who formed part of Youtubers.cat, and I hadn’t heard of the contents of the group behind Canal Malaia. Taking part meant that I met more people from the Catalan community of creators, as well as people like Drulic from Youtubers.cat. Each one has something that you incorporate into your way of doing things.

So, Canal Malaia seems to have helped bring together the creative community in our language, doesn’t it?

It’s had a really cool impact. It’s something that had to come about sooner or later. What’s most interesting about the initiative is the networking among creators, because this can lead to collaborations, shared projects, podcasts… And this can have a snowball effect. However. Everyone is capable of producing contents. Even a nobody like me with a microphone can say whatever he wants to the world. This should be positive for Catalan, but you also have to be careful because it could lead to more mediocre contents.

And finally Marc, could you tell us what you miss in the community of creators in Catalan…?

When contents are produced in Catalan, the language or independence is normally discussed, serious things but not too many mundane things. I miss beefs [controversy in which users confront each other on the social media]. For example, I received a video-response for the video I made on Racó Català. We need more confrontational contents, a bit of celebrity gossip. Juliana Canet is now doing it on APM… The networks must be used in the same way as those producing in Spanish and English.