The puntCAT Foundation meets with the main cultural, educational and institutional players of the Balearic Islands 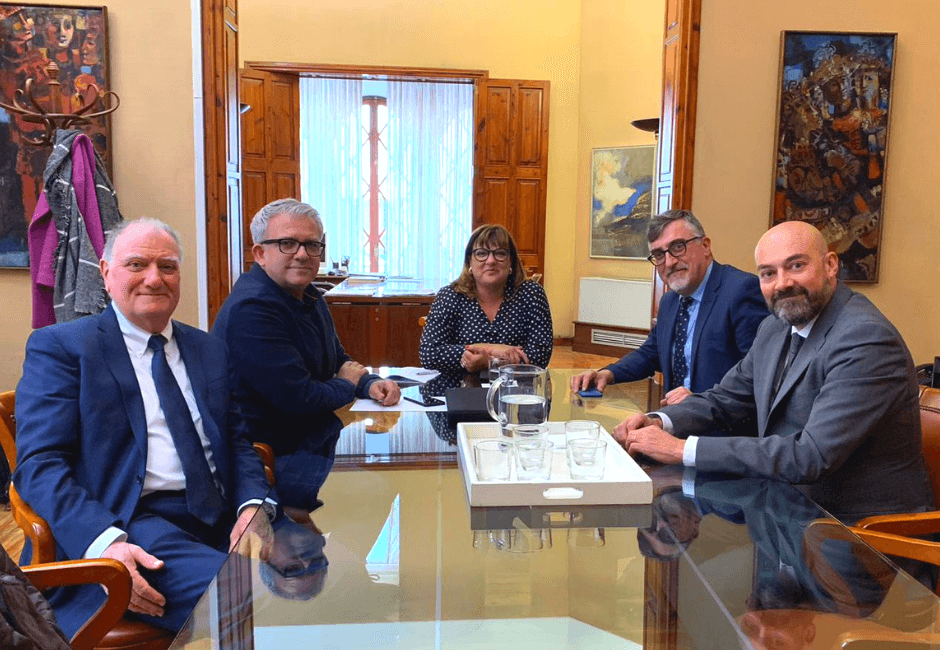 The puntCAT Foundation meets with Bel Busquets, Vice President of the Regional Government of the Balearic Islands and Department of Innovation, Research and Tourism; Llorenç Huguet, rector of the University of the Balearic Islands; Carmen Palomino, Councillor for Modernisation and Public Function and Josep de Lluís, president of Obra Cultural Balear.

The puntCAT Foundation travelled to Palma de Mallorca to meet with the main cultural, educational and institutional players of the Balearic Islands. The president of puntCAT, Carles Salvadó, its secretary, Saül Gordillo and its director, Francesc Giralt, attended all the scheduled meetings.

The conference began at 11 a.m. at the University of the Balearic Islands, where puntCAT met the rector, Llorenç Huguet. The meeting was also attended by the Vice-rector, Jaume Carot, the professor and long-serving trustee of the puntCAT Foundation, Llorenç Valverde, and the director for linguistics policy, Rosa Calafat. The Foundation explains the main educational projects and the lines of work marked out for 2019 – 2020. A clear desire to collaborate was declared and an agreement reached to sign a pact to work together on the projects of joint interest.

The meeting at the Council of Majorca began at 1 p.m. puntCAT met with the councillor for Modernisation and Public Function, Carmen Palomino. At this meeting, the president of puntCAT, Carles Salvadó, explained the work being carried out by the Foundation to reach the entire Catalan-speaking region and the interest in working more closely with the Council of Majorca. All the projects developed by the Foundation were presented and, more specifically, focus was placed on elteunegoci.cat, which seeks to support, accompany and provide internet visibility for small businesses.

Later on, puntCAT met with Bel Busquets, Vice president of the Regional Government of the Balearic Islands, and Benjamí Villosada, director general for Technological Development. The meeting was held in a very friendly atmosphere, sharing projects and visions. .Cat explained the digitalisation activities planned for 2019 and focused on the Regional Government’s range of institutional websites and how the Foundation can help support them and develop new ones.

The puntCAT Foundation continues to work on ensuring .cat reaches the entire Catalan-speaking region, developing projects to reduce the digital gap and collaborating with other entities to disseminate and promote Catalan on the internet.