Vinton Cerf, the father of the Internet, And the puntCAT Foundation meet again 14 years after the .cat domain creation 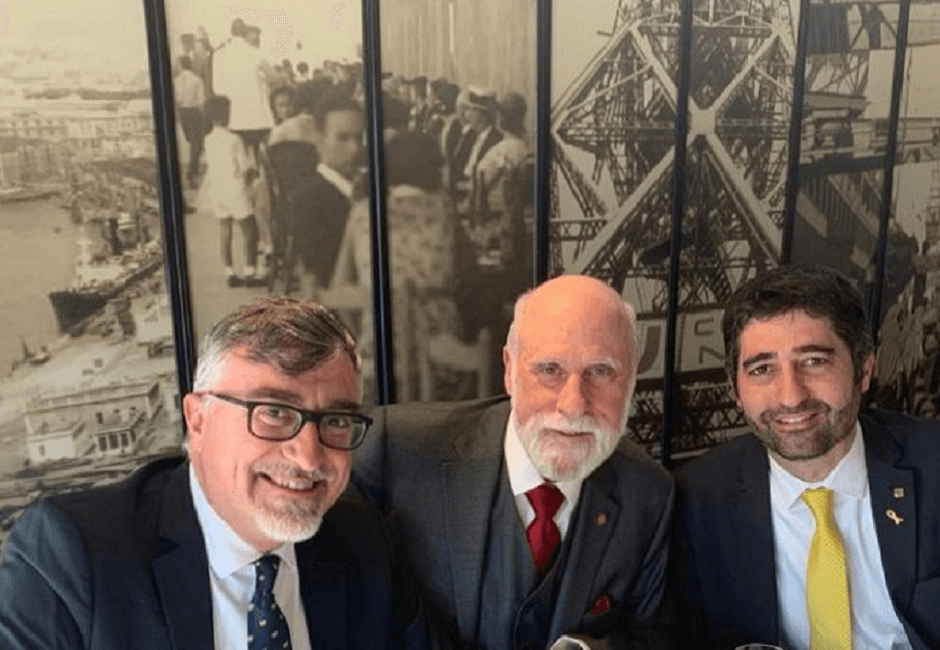 On the occasion of Vinton Cerf’s International Catalonia Prize, the PuntCAT Foundation organised a lunch to acknowledge his work. This casual and friendly meeting is especially valuable. Views will be exchanged and the Internet track record reviewed from different perspectives.

The award ceremony of Vinton Cerf’s Premi Internacional Catalunya (International Catalonia Prize), which will be held today at 7 p.m. at the Palau de la Generalitat (the Catalan government seat), highlights the work carried out by Vinton in the field of the Internet and the key role he played in the approval of the .cat domain in 2005. The winner has donated part of the amount of this award to the PuntCAT Foundation for it to foster the promotion of Catalan on the Internet in the Catalan-speaking regions, as has been carried out so far, as well as to keep being a success model for the rest of first-level cultural domains that have been created after the .cat domain. This donation will increase the allocation of PuntCAT grants this year and its impact on Internet use in Catalan. The research or digital innovation project that best contributes to this purpose will receive the Vinton Cerf Distinction. The Open Call for Projects budget thus increases from €160,000 to €180,000.

On the occasion of Vinton Cerf’s International Catalonia Prize, the PuntCAT Foundation organised a lunch to acknowledge his work. This casual and friendly meeting is especially valuable. Views will be exchanged and the Internet track record reviewed from four different perspectives: that of the Government, provided by Minister Puigneró; that of the private sector, provided by Google; that of academia, provided by Cerf; and that of civil society, represented by the puntCAT community. This fourfold helix will allow us to reflect on the role of the Internet and digital services in solving the technological and social challenges we face on a local and global level.

In 2000, Vinton Cerf was also elected president of the ICANN (the Internet Corporation for Assigned Names and Numbers), whereas shortly afterwards, in 2003, the body started a process for the creation of new top-level domains for specific communities or sectors. The Catalan-speaking community of Internet users, involving more than 60,000 people and 100 associations, filed the request for the creation of the .cat domain. On 16 September 2005, at 1 a.m. Catalan time, the request under Vinton Cerf’s mandate was approved. At present, the .cat domain exceeds 109,000 domains and is the domain of choice for the Catalan-speaking society.